Ready, Wet, Go! is a mobile gaming platform that allows for users of all ages to play traditional swimming pool games with the added connectivity of smart phones and wearable technology. 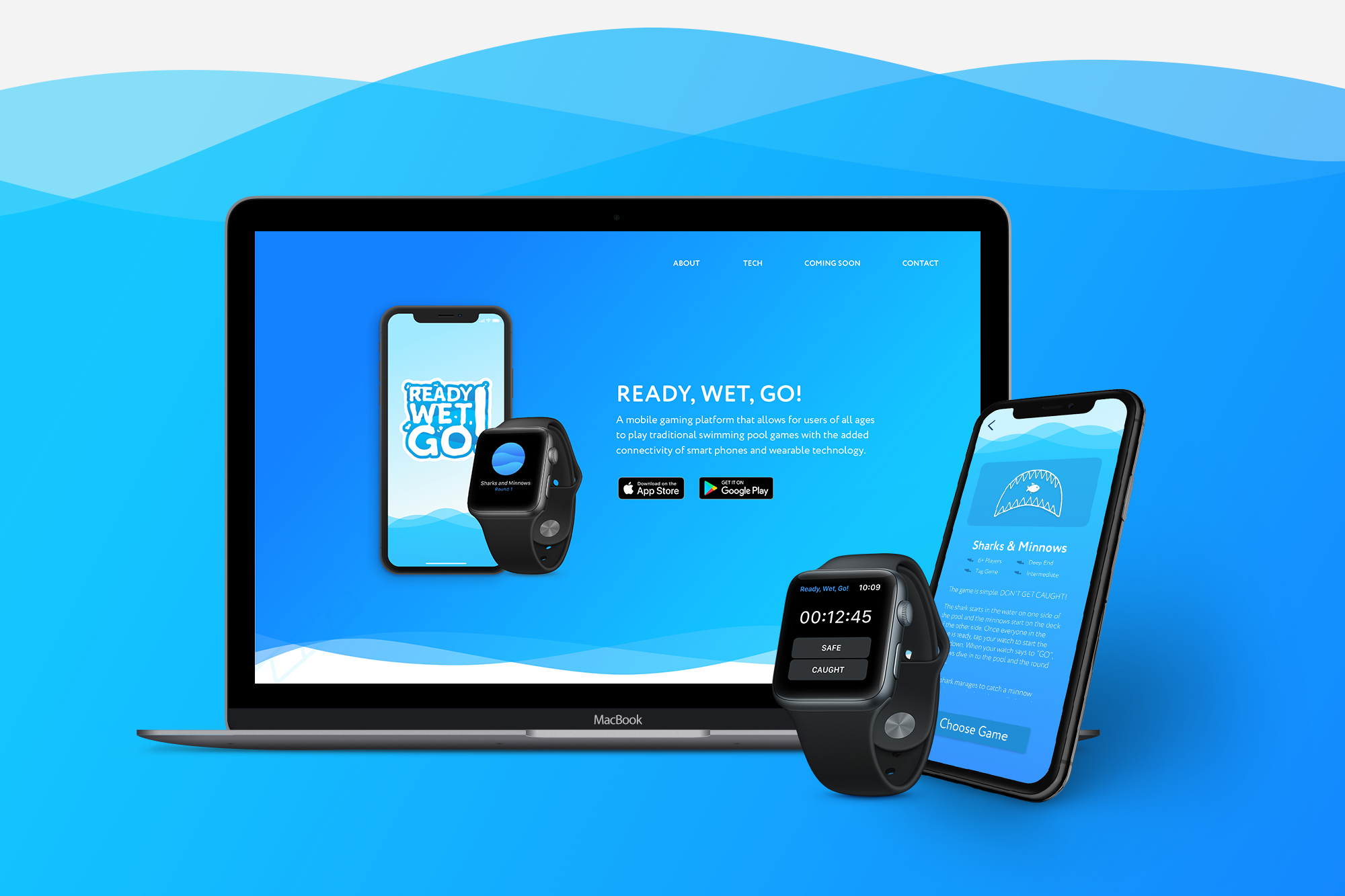 The pool has always been a place for kids to get together to hangout and spend time with their friends. As someone who was on the swim team, I spent pretty much everyday after swim practice with my friends playing games, having splash contests, and seeing who could swim the fastest breaststroke. As the age of getting a smartphone has gotten younger and younger, kids are more likely to choose their smart devices over spending the afternoon at the pool with their friends.

When the water-resistant Apple Watch was released, it opened up new opportunities for users to interact with their smart devices while in (or near) the pool­ — an area that’s typically electronic-free. When brainstorming for this app there were two main problems:

These issues made me think — is there a way to combine the fun, interactivity of the pool…while still being digitally connected to your friends?

I’ve spent my entire life around the pool. As a kid, I grew up spending pretty much everyday at the pool, both outdoor swim clubs during the summer and indoor YMCAs during the winter, and when I was old enough, I applied to be a lifeguard. These factors give me personal experience and multiple perspectives on the entire swimming experience, which really helped me understand who this app is for, how it will be used, and any limitations there might be.

Since this app utilizes waterproof smart devices — technology that wasn’t available when many of us were growing up — I sent out a survey asking what kind of games that swimmers loved to play in the pool, and ways that this technology could be used to make the experience even better.

“Sharks and minnows and Marco Polo would be cool with a timer.”

“Little owl or big owl would be cool with a depth gauge.”

“Maybe the watch could count down from a set number of seconds you have to catch the person???”

“Sharks and minnows, categories, movies, colors, midnight swim (try to get to other side of the pool with the person who is “it” not knowing) kinda like categories but it’s the silent version!”

Even though I had good understanding of the target market, I created a few personas in order to provide a few examples of users that could benefit from using this app. Having these personas also gave me “real” users to keep in the mind when making decisions for the app; it allowed for me to ask questions like, “What is something Kevin could benefit from?” or “Would Adrianna need a chat feature within this app?”

Using the paper prototypes was extremely useful, because my I was able to conduct user tests where the users were able to physically interact with the prototype so they could understand how the app worked. Based off of their tests I was able to work with them and move the order of the screens and discuss their experience and the issues or questions they had.

Creating wireframes allowed me to focus on the user flow and the layout of the content itself, without worrying too much about visual elements like color, typography, or copy.

The final prototype for the app shows the user flow begins on the iPhone and shows the main host of the game creating their profile, choosing a game, and inviting their friends to play in a game of Sharks and Minnow. When the host invites other players using their iPhone, they are then sent a game invite on their Apple Watch which then adds them to the hosts player list. Once the game has started and everyone is assigned their role or team, the game is then completely transferred to the watch so it can be used during gameplay.

For more detailed descriptions on the research, logo development, userflows, and the rest of my user experience process for this project…check out my case study on Medium.com